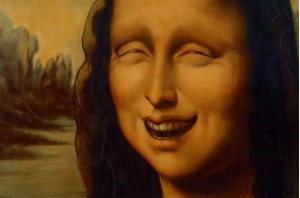 Energizer Bunny arrested – charged with battery.
A pessimist’s blood type is always b-negative.
A Freudian slip is when you say one thing but mean your mother.
Shotgun wedding: A case of wife or death.
I used to work in a blanket factory, but it folded.
If electricity comes from electrons… does that mean that morality comes from morons?
Marriage is the mourning after the knot before.
A hangover is the wrath of grapes.
Corduroy pillows are making headlines.
Is a book on voyeurism a peeping tome?
Dancing cheek-to-cheek is really a form of floor play.
Banning the bra was a big flop.
Sea captains don’t like crew cuts.
Does the name Pavlov ring a bell?

It has been said that the most typical response to a pun is a groan. They may be delivered in the short form illustrated above, often called “groaners”, or they be even more groanful when they appear as punchlines at the end of long, drawn-out tales known as a “shaggy dog stories.”

An apocryphal story has it that as a young boy George Bernard Shaw was an incessant punster. One day, his father was so irritated by all the punning that he put George into a closet and threatened to not let him out until he had made a very great pun. Whereupon, according to the story, young George immediately implored his father to, “O-pun the door!”

Where are you on the pun spectrum? Some people love this kind of word play; others hate it; still others are indifferent. Some just don’t get the jokes. Some people seem to be natural-born and even habitual punsters.  I love them and admire the well-constructed pun. I don’t typically think them up until someone or some thing gets me going, then I can usually bounce them back and forth fairly readily.

MY ADVICE: If you are a punster, don’t expect peals of laughter from your audiences. You would do well to learn to expect and be pleased with groans more so than laughter; and if you also get rolling of the eyes accompanying the groans, that is a bonus sign of appreciation for your well-delivered pun. Just say, “Thank you!” and take a bow.