0
0
0
0
Share with your friends
Submit
The art of humor and the humor of art are important but often overlooked aspects of the vital role that humor and laughter play in our lives. Humor itself is an art. And, artists of all genres–visual, musical, written, comedic, etc.) create humor, portray humor, and use their talents to illuminate the human condition. Many of their creative ‘products’ can contribute to healing. There is a significant art-humor-healing intersection or energy vortex that I’ll be elaborating on in a future blog.

With this blog I want to introduce you to Katy Franco, one of the people I consider the personification of the art-humor-healing intersection. The information here is largely taken from her websites, but comes from my heart because her joyous and funny work comes from her heart.

Performing in English and Spanish, she has entertained in the United States, Puerto Rico, Venezuela and Argentina.

Her acting credits include dramatic and comedic roles in the theater, soap-operas, films and mini-series (with an award for “best supporting actress”). She has hosted a children’s television series and HBO Latino in Hollywood, and has been an entertainment reporter at Telemundo in Los Angeles. As a comic, she performs through:out Puerto Rico and tile USA, and in Hollywood’s most famous nightclubs (including the Laugh Factory on Sunset Strip, where she is a regular, the Improv on
Melrose and the Ice House in Pasadena).

In 2006 Katy stepped into a very different spotlight when she announced that she was a breast cancer survivor. Appearing on stage and in countless news programs, magazine articles and newspaper stories, she devoted the past two years to educating Latinas about early detection. Her experiences became a one-woman show called Sacando Pecho about overcoming the disease. Since 2007 she also has been the spokesperson for Avon Puerto Rico’s breast cancer crusade.

Since 2006 her breast cancer awareness campaign has enjoyed extensive coverage in the media. She created a one-woman show about her fight against the disease, and wrote “Chemorella” with her husband. Bilingual in English and Spanish, she has the experience and talent to enlighten and entertain women about breast cancer. 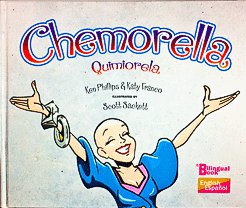 “Chemorella” is a Cinderella story about beating cancer and seeing your dreams come true. The heroine is a young woman who goes from the rags of illness to the riches of health, love and  success.

The book is in English and Spanish and has 28 beautiful fill-color illustrations.

“Chemorella” inspires hope while it entertains. This retelling of the Cinderella fairy tale is an inspiration to the patient, and helps kids and teens to deal with their fears. The story also gives parents a means to introduce the positive effects that the experience can have on the family.

Chemorella herself is a positive role model for the patient. Reaching out to the patient, this is a story to inspire her, make her laugh and reassure her she will indeed get better.

With humor and compassion, “Chemorella” addresses the challenges a cancer patient faces, such as depression, chemotherapy, surgery, and baldness. It shows how tears and fears can be overcome by courage, creativity, and accepting love from everyone around you. Its happy ending says that everything is going to be okay.

I am glad to call Katy my friend. I am glad she had the inspiration and talent to write this book. Everyone I know has been affected somehow by breast cancer. I wish it wasn’t so, but you can be sure I will be sending out many copies of “Chemorella”.