They say that everything we do in life is preparation for something we will do later in life. Yet, somehow, with about 100 billion people having died in all of human history, and having buried the dead for 350,000 years, death remains the thing for which most people are unprepared. You might think we’ve had enough practice to get us used to the idea, but apparently not. We either need more practice or a different way of looking at death. More practice probably won’t help, but a different perspective will. Here it is.

Fear of death is one of the strongest fears of human beings. The moment we are born we are headed for a certain death, or for death certainly. But, fear of death —whether it’s a fear of the mysterious unknown, a foreboding religious proposition, or something else– stimulates denial, through which we avoid proper planning, and are often left suspended in not-very-well-suppressed anxiety.

Humor allows us to be open to new perspectives and, when coupled with laughter, helps discharge emotional tension. Working with psychiatrist Joel Schwartz, MD, calling ourselves HAMS ON WRY, we have launched “Laugh Will & Testament”. This is the first in a series of programs of applied and therapeutic humor based on psychologically sound principles for making it easier to talk about things that are hard to talk about.

If we can do a better job of planning for the end of life, we will be better able to enjoy the rest of our lives. More than merely talking about the topic, we offer participants experiences and activities based on existing beliefs, theories, and scientific findings. These activities have the potential to be therapeutic in the sense of allaying fear, anger and depression; strengthening optimism; and, lifting spirits (pun acknowledged). 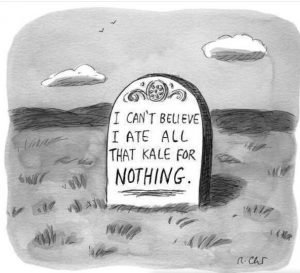 When presented by credible mental health and humor experts, humor becomes a therapeutic ally. Audiences relax when they experience desensitization through immersion in death-related humor. Being more relaxed, they are more ready to consider alternative perspectives on the topic; to plan; and, to consider adding non-traditional, light-hearted touches to end-of-life traditions such as obituaries, epitaphs, and memorial celebrations.

While working on this project, I decided that one of my legacies of laughter will be a “Laughs Box”, chock full of as many funny jokes and quips as I can stuff into it before I go. My instruction to anyone who is mourning my departure is to open the box and read the contents aloud. I hope they will have the good sense to stay awake to read every one of them, even if takes all night, preferably as a group and imbibing either their favorite adult beverages or ice cream sundaes.

I’ve had so much plastic surgery that when I die they’ll donate my body to Tupperware. ~Joan Rivers

I’m not afraid of dying, I just don’t want to be there when it happens. ~Woody Allen

“The halls of heaven ring with the laughter of the saints.”

They say that everything we do in life is preparation for something we will do later in life.

I remember when I was drawn into a ‘calling’ for humor (it was 1984), being impressed with the witty quips that showed how humor, aging, illness, death, and happiness might be connected.

“Enjoy life, nobody is getting out alive.”

“You’re only young once, but you can remain immature indefinitely.”

“Humor may not cure anything but it makes the unbearable a little more bearable.”

“Standup comedians have a special way of describing success; they want to kill but they don’t want to die.” 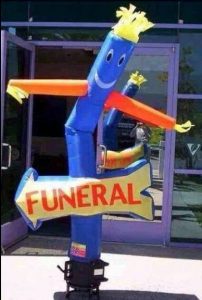 Back in the day when I was starting my humor expedition, health was the central theme and promise of what humor would bring if we did it right. Norman Cousins, and a group of nurses, were leading the way. Death and dying were not tackled head-on, but were alluded to around the edges of humor prescriptions. But,  things are changing. According to trends in religion and the funeral industry, in today’s world of global communications and modern thanatology, more people are open to things like fun funerals and good goodbyes.

More than 100 euphemisms attest to how hard it is to talk about death directly. Here are a few: Bought the farm. Pass on. Bite the dust. Cashed in one’s chips. Crossed the Jordan. Give up the ghost. Go to one’s reward. Kick the bucket. Pushing up daisies.

In Roz Chast’s graphic memoir, “Can’t We Talk About Something More Pleasant?”, she finds humor and heartache in being her parents’ sole caretaker during their final years.

When she died in 1962, my mother’s youngest living sibling was my Uncle Irv (of blessed memory). During the official period of mourning, he taught me some important lessons about death and dying. These have stood me in good stead ever since. One lesson was that in grief there is a need –an obligation– to balance the heavy weight of loss with something light and self-caring. There is no way that he could have realized that he was foreshadowing contemporary trends in thinking about death and dying, and was helping to prepare me for what I am doing now.

I was 20 years old. My mother, age 52, had died of ovarian cancer just weeks following the diagnosis.

We were observing “shiva” at my parents’ apartment. Shiva is the week-long mourning period in Judaism for first-degree relatives: father, mother, son, daughter, brother, sister, and spouse. The ritual is referred to as “sitting shiva”. Immediately after burial, people assume the status of mourner. This state lasts for seven days, during which family members traditionally gather in one home (preferably the home of the deceased) and receive visitors, observing the traditional Jewish week of mourning immediately following the burial of a loved one.

It was a horribly sad, confusing, and solemn time.

The afternoon of the third day, I was sitting on a couch next to Uncle Irv. We had been sitting in virtual silence for a couple of days when he leaned over and whispered a question to me, “Have you ever had a manicure?” I didn’t believe I heard him correctly so I asked him to repeat the question. He did. I said, “No.” The conversation went something like this.
UI: “Well, let’s get a manicure.”
Me: “When?”
UI: “Right now.”
Me: “How?”
UI: “There’s a salon close by. I’ll bet we could walk in and get manicures together.”
Me: “Are you sure it’s OK?”
UI: “Yes. Especially when you are so sad. Even in grief, you must take care of yourself. You must be kind to yourself. A few minutes of distraction, the walk to the salon, and having the manicurist take care of us, will be a good thing.”

With the explanation that we were going out for some fresh air, we excused ourselves from the small group of condolers in the apartment. During the walk to the salon, Uncle Irv talked to me, Yoda-like, imparting a few life lessons like this one that turned out to be powerful, and have been valuable to me ever since. Walking back to the shiva, I felt a little bit better but not because of the manicure. It was because of the comfort I felt listening to Uncle Irv’s wisdom.

Now, I am at the stage of life that some refer to as The Third Act. There are surely more days behind me than ahead. I’m prepared to tackle the topic directly, and with humor. In the process, I intend to offer others the opportunity to do the same.

I’ve cultivated a deeply appreciative understanding of the psychology of humor, the science of laugher, and pathways to happiness –including more than 40 years of Buddhist meditations on mortality. I am closer than ever to coming to terms with my mortality, and blending it all into programs and seminars on the topic. Every time I deliver this program, I remember gratefully those who have helped me prepare for the occasion.

They say that everything we do in life is preparation for something we will do later in life. I don’t know who ‘they’ are, but I think they are right.

ow booking programs and seminars for “Laugh Will & Testament” for select dates through 2018, anywhere, especially in North America, especially in South Florida during the winter of 2018. This program is perfect for churches, synagogues, organizations, funeral planners, mental health professionals, clubs, adult education, and retirement communities. To book this program now, contact Pamela Stile, 1-800-669-5233.

Steve Wilson, known as the “Cheerman of The Bored” and the one and only “Joyologist”, is the founder of World Laughter Tour, Inc., Director of National Humor Month, and has trained 7,000 laughter therapists. He is the author of seven books and dozens of articles and blogs, ,an internationally acclaimed, award-winning humor expert, and one of America’s top‐rated professional speakers.  For more information visit Facebook page Laugh Will & Testament, and the websites for World Laughter Tour, and National Humor Month.

Joel Schwartz, MD brings a distinguished background to Hams on Wry. He almost flunked out of nursery school because he was unable to sit still on his square on the floor – but despite this squirminess, which continued during his tenure at Franklin and Marshall College, he was Phi Beta Kappa. He went on to receive his medical degree from Hahnemann University Hospital, and his psychiatric training at the Institute of Living, and Hahnemann University. Visit his StressLessShrink website/