0
0
0
0
Share with your friends
Submit
The idea that the frequency of merely getting on base might just be the single most important statistic in the game was drawn ever so clearly for me in the film, “Moneyball“.

I have spent way too much of my life waiting to hit the grand slam that wins the World Series, believing that it was the only thing that counted. I expected that  one day I would hit ‘the big one’ and then be bathed in glorious contentment, satisfaction, and the admiration of my family and friends, thereafter. I could not have been more wrong.

I see now that I have not kept score on myself either accurately or realistically. By under-valuing the importance of just getting on base, I diminished my accomplishments and the joy that I might have had all along.

I am making up for that now with a new perspective. I have lowered my standards appropriately.

I realize that I am really good at getting on base.

Yes, I have made a lot of outs, and swung at some mighty bad pitches,

Notwithstanding the occasional home runs and the even rarer grand slam, there have been many, many more walks, singles, doubles, and triples than I ever gave their proper due. I’ve gotten on a few times by being hit by pitches, but, fortunately, never been beaned.

I’m reviewing a lifetime of stats now, hoping to re-live as much as possible every on-base at bat, delighting in them all, watching the game films in slow-motion, savoring every step around the bases.
A recent epiphany brought me another kind of clarity as I partied into the night with a group of workshop attendees. Haunting memories of last year’s medical Odyssey melted away somehow and moved from an irrational, PTSD-type of apprehension, to the background. Over. Done. Past. And passed. It was the gift of insight into a personal milestone. 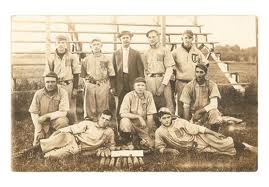 To paraphrase Ernest Thayer with a different ending for the Mudville nine:
“Oh, right here in this favored land the sun is shining bright;
The band is playing right here, and here now hearts are light,
And here one man is laughing, and hearing children shout;
There is great joy in Mudville — Stevie Wilson’s back on base.”
Looking back over a lifetime of getting on base I am determined to enjoy taking my sweet time rounding my way towards home.