In 2010, my husband and I were offered a great opportunity to work and live in Abu Dhabi, one of the 7 Emirates that make up the UAE– United Arab Emirates. We lived in a gorgeous posh two story apartment that overlooked the Arabian Sea. We were surrounded by malls, incredible architecture, fancy cars, 5 star hotels and restaurants, and were just about 200 yards from the beach. I enjoyed a magnificent ex-pat life there, an area of the world that became super rich after discovering oil. 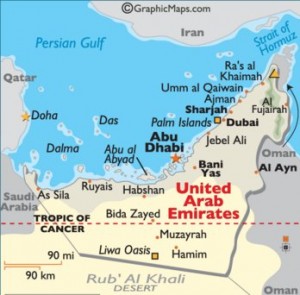 In December 1971, the United Arab Emirates became an independent country, under the rule of the Emir (President), Zayed bin Sultan Al Nahyan, best known as Sheik Zayed. Sheik Zayed was a visionary. He saw a city where there was sand. He built hospitals, schools, Universities, and allowed the people free access to them. The wealth was shared with the UAE citizens. To this day, many Emirati citizens do not need to work because of their wealth. Because of the aggressive plan to turn this country into a “player”, many opportunities became available to ex-pats around the world to bring their expertise to help bring the great visions to reality.

The ex-pats account for approximately 80% of the population in the UAE. But not all ex-pats live the privileged life that the western ex-pats are living. The ones that could provide physical labor, such as construction, housekeeping, and minding the children (nannies), often come from 3rd world countries. They are not allowed to bring their families, and are not allowed to even hold their own passports. The passports are held by their employers. But they come to the UAE so that they can earn money to feed and educate their families back home. They do not live in the posh, grand homes that the westerners and locals live in. Many are housed in labor camps (yep, that’s what they call them) or in tiny broom closet sized bedrooms built into every home for the live-in servants to sleep.

After being there for a good part of the first year, I began to see and take notice to the imbalance of how the physical laborers were treated and the conditions of their lives. I could see such hopelessness on many of their faces. I was deeply bothered by it and wondered what I could offer to reduce their suffering. I heard that an Indonesian Women’s shelter at the Indonesian embassy in Abu Dhabi was providing a safe place for Indonesian women who needed help. These women had left their employers and were seeking shelter in a safe surrounding at the embassy. They had run from their employers for a various number of reasons (abuse, withholding of pay, depression, fear, trauma, etc…). They could not leave the women’s shelter on the Embassy grounds or leave the country because their employers held their passports. Some remained there for up to a year until matters were resolved in the court. The space was small and crowded, and at times, held up to 70 women, sharing 3 bathrooms.

Several British, European, and American expat women got permission to offer “therapeutic” activities to these young Indonesian Muslim women, most of whom did not speak ANY English. The volunteers had created a program where activities were offered all during the week, such as exercise, yoga, crafts, poetry, nail painting, dancing, and lessons in English. And there were still some time slots to fill. I was eager to serve in some way, but not sure how my training as a Certified Laughter Leader and trainer with World Laughter Tour (2007 – 2010) would go over with Muslim women in such dire circumstances.

Before making a commitment to lead laughter club sessions with these women, I wanted to first meet them and get a feel for what I might be facing when I walked in there. So, I got permission to join one volunteer as she led her weekly exercise class with the young women. I participated in the exercises along with them, and to my most pleasant surprise, there was as much silliness, laughter, and goofing around as we all tried to stretch and bend in ways that made us groan, as there was serious exercise! One young woman saw that I kept lifting my hair off my neck to cool down, and she offered me a ponytail holder. We made a connection.

I made a commitment after that morning, to offer bi-weekly laughter exercise sessions. It was time to test the theory that “laughter is universal—it is a common language that we all share.”  In order to help describe and set up each exercise to a group that did not speak English, I spent the weekend before my first session with a big pad of paper and googled things like “how to draw an alligator”, etc.. and made drawings. I wrote the name in English and the women taught me the Indonesian name.

The first session was a huge success!

These women were the most enthusiastic, fun loving group that I had ever worked with! I was blown away by their playfulness, laughter, and most of all, RESILIENCE! My sessions went on bi-weekly for the next year, with the support of other volunteers, until my husband and I returned to our home in Maryland in 2012.

In Native American tribes, it was common for the medicine man or shaman to carry a small medicine pouch. In it were items that the bearer of the pouch considered sacred items for healing, such as bark, roots, herbs, and other talismans such as stones and feathers. I say that laughter and a smile belong in your medicine pouch.

To this day, I still see these beautiful smiling faces, full of life and laughter in the time we spent together. Through our laughing together, we built bridges that connected cultures and found that, indeed, laughter was our common language.

A recent article, “How laughter reconnects us with life’s simple truths,” is about  the inaugural Dubai Comedy Festival. Perhaps Heather’s efforts help pave the way for such a remarkable event.

Join the family of merry mirth makers at World Laughter Tour. Become a Certified Laughter Leader by learning “How to Create Therapeutic Laughter”.