By Steve Wilson, Psychologist, Joyologist, and Cheerman of The Bored
© 2015

SUPER HUMOR POWER is an attitude informed by knowledge and made visible in actions.

Some people are way more “in humor” than others. Senses of humor (yes, there are dozens of them) appear to range across a spectrum from low (no sense of humor) to high (a great sense of humor).

Super Humor Power is a relaxed attitude, frequently characterized by not struggling; going with the flow; having high levels of self-acceptance and acceptance of others; tolerance for imperfection; seeing the cosmic joke; and, authenticity. In addition to being about knowledge and ideas, it is encompasses certain things you do.

To write “Super Humor Power,” I read up on every reason and method that I could find for developing a sense of humor, and distilled my findings to 79 principles that (a) were cited by several authors, (b) appeared to have been substantiated by at least some research, or (c) made the most sense to me.

I first proposed and described a Scale of Humor Power in “The Art of Mixing Work and Play” (Advocate Publishing Group, 1992). I based the idea of a sense-of-humor spectrum on my observations of thousands of psychotherapy patients and, by then, more than 100,000 participants in my humor seminars and workshops.

In the Western world, in those days, what some might have called ‘the humor movement’ was almost exclusively about encouraging people to develop their sense of humor and playfulness. The now-popular systems for invoking the power of mirthful laughter, and even laughter-without-jokes came much later.

Non-competitive games had already been popular for several years. The benefits of laughter were most often surmised to be some a kind of endorphin effect. Ancient practices involving laughter, e.g., Tibetan monks did it in the Eastern world, were referred to in vague terms; few specific practices were known or offered. National Humor Month had been established by humorist Larry Wilde in 1976, but laughter as a therapeutic activity process for mass consumption, especially in the Western Hemisphere, would not be developed for another twenty years.

At that time, there was relatively little scientific research on the topic. However, there was a burgeoning literature and some workshops, which were often an off-shoot of the so-called Human Potential Movement. You would have had to consult dozens of different books and journals to find all the techniques that were recommended for developing one’s sense of humor.

What was missing was a quick reference guide or handbook that could help anybody be “in humor” more often. I was able to boil down the available information to the seventy-nine “secrets” (principles) of SUPER HUMOR POWER that comprised my book. To help illustrate and reinforce these principle ideas while entertaining the reader, I dressed it up with quotations, cartoons, and jokes that accompanied each “secret”.

“Your success and happiness lie in you. Resolve to keep happy,
and your joy and you shall form an invincible host against difficulties.”
~Helen Keller 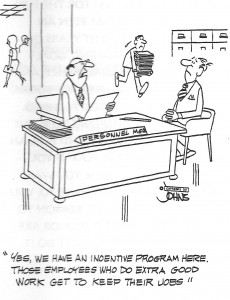 SUPER HUMOR POWER is a serious book that is fun, and it is a fun book with a serious purpose. Either way, I felt that if anyone could use the priciples to improve any part of his or her life with humor, I had accomplished my goal.

BMR (By My Reckoning) humor power is distributed along the normal (bell-shaped) curve. Of course, in this business, the word ‘normal’ is strictly a statistical concept. 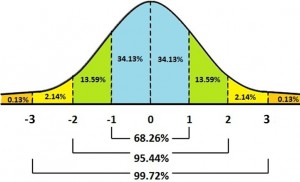 This chart does not display my estimates. I put it here just to make this look very scientific.

People at the low end of the scale, I call Humor Impaired (HI!). They account for 10-15% of the general population (BMR).

HI’s rarely “get” the latest joke going around (or the old jokes, either, for that matter). They have difficulty seeing the humor in a situation. If they acknowledge humor at all, they do it grudgingly. They are the wet-blankets, party-poopers, fun-stealers, and kill-joys. They urge us to “get back to work” because “we’re not here to have fun.” These are not the kind of people you want to hang around with for very long and, I hope, you don’t want to be like them.

If you know anyone who is HI, you might want to give him or her my book. If you sense that you might be HI, yourself, then make the book your required reading. Read it, study it, and practice the principles in it. Soon, you will be HUMOR POWERED.

Most people are distributed in the middle of the scale (60-70%, again, BMR). I call this group “Humor Accidental” (HA!). The HA’s (Humor Accidentals) that is, most people, will laugh at jokes, and they can often see the ironic, absurd, or silly side of a situation (even when everything is going wrong). It isn’t too hard to get a smile or a laugh out of them, but they don’t go out of their way to be “in humor.” They enjoy laughter and playfulness when they bump into it (accidentally, as it were) but often feel too self-conscious to be comfortable in the humor spotlight. They are pleasant people to be with.

At the highest end of the scale are the SUPER HUMOR POWERED. They account for another 10-15% of the general population (BMR). They use humor frequently, consciously, confidently, and competently to bring joy to themselves and others. They place a high value on humor and laughter and playfulness.

How to recognize a SUPER HUMOR POWERED person.
Typically, they display three or more of several characteristics. Notice that this list closely matches lists of the characteristics of mental health!

YOU CAN DO THIS
As you absorb and practice the 79 principles, you will advance up the sense-of-humor scale and become SUPER HUMOR POWERED!

Get on the fast track to Super Humor Power. Join the  family of merry mirth makers. Now there are 4 ways you can learn “How to Create Therapeutic Laughter”. Sign up today!