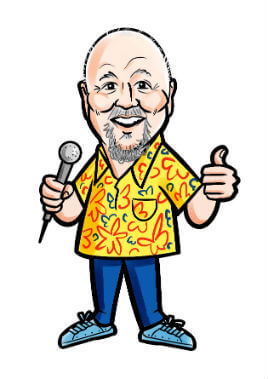 World Laughter Tour, Inc., is the brainchild of psychologist and self-proclaimed “Joyologist” Steve Wilson, who describes his role as “Cheerman of The Bored.” The creation of World Laughter Tour was an idea that came to him during a 1998 lecture tour to India, after participating in the Juhu Beach Laughter Club at the Arabian seaside in Mumbai. In India, Laughter clubs were referred to as ‘Hasya Yoga’.

Nevertheless, for Steve Wilson, this first introduction was the spark to initiate a clear vision of bringing Laughter Clubs to the United States, of course with certain adaptations to suit the Western mentality. As he imagined, certain laughter and attitudinal practices could be systematized and taught as a means to influence health and peace, while promoting happiness and longevity. Hence, he sought out to connect with these gurus, recognizing the enormous potential that existed in applying a systematic approach to laughing without using jokes, under the guidance of a trained leader and motivator.

Struck by a noble impulse, Steve flew an Indian physician to the United States, whereupon he delivered a series of lectures and demonstrations. The reaction to a laughter exercise program in the U.S. was both startling and telling, growing instant curiosity and support from the participants and the media. With the encouragement of his wife, Pamela, the World Laughter Tour was officially launched in July of 1998.

It took about a year to put together the first laughter tour in the USA. Thanks to the generosity and sponsorship of Dr. Valeriana Moeller, president of Columbus State Community College, The World Laughter Tour had a very successful kickoff on May 27, 1999 in Columbus, Ohio. The tour traveled to 14 cities for the next 7 weeks, demonstrating the method to diverse audiences.

Since its inception, World Laughter Tour has been recognized as a significant global influence in the practical applications of laughter and humor for health and world peace. Steve Wilson is a very popular and talented Certified Speaking Professional, experienced educator of mental health professionals, member of key professional organizations such as Association for Applied and Therapeutic Humor (AATH), International Society for Humor Studies (ISHS), and the American Humor Studies Association (AHSA), as well as having been the 2010 recipient of the Doug Fletcher Lifetime Achievement Award, and Rire d’Or Golden Laughter Award in 2007 from the French School of Laughter and Well-Being.

He still maintains a very active presence in WLT and will often answer phone calls and inquiries, as well as making himself available to trainees, attendees, the media, or other interested parties who wish to speak with him personally.