At about this time every year –near Valentine’s Day– I check the latest statistics on marriage and divorce. I figure that if divorce rates are declining substantially, I will stop giving advice to the lovelorn. Here we go again.

Discovering the succinct if shocking facts in several sources this year, I decided to explain some of the most powerful ideas for finding lasting love in a recorded one-hour webinar  “Authentic Intimacy: Finding Lasting Love”.  Now, couples can study the 14 Predictors for Dating Relationships, the 27 Terms & Conditions For Successful Marriage, and how to add a healthy dose of humor, ad infinitum (or ad nauseum, whichever comes first).

As a BONUS, I suggest 2 Moral Obligations and 6 Nearly Magical Phrases that will keep relationships humming along. These strategies may come too late to save already failing marriages, or those already disrupted by divorce, but they can be insurance for the success of love in the future.

Let’s compare notes. In addition to having gotten my own nose bloodied (so to speak) in a few relationships, I have counselled hundreds of people about relationships professionally. Taking my own advice, I have been on the relationship practice-makes-perfect-program and believe I have finally got it right.

I am especially interested in hearing the advice you would you give to those seeking long-lasting love if you have found a way to get out of the relationship revolving door and into a successful love relationship, or if you are in one of the occupations where people tend to talk a lot about their relationships (bartender, taxi driver, barber or hairdresser).

Most people already know that around 50 percent of marriages in the United States end in divorce. The number is similarly high in many other developed nations.

The average length of a marriage that ends in divorce is eight years.

People wait an average of three years after a divorce to remarry (if they remarry at all).

The average age for couples going through their first divorce is 30 years old.
About 1 percent of the total number of currently married same-sex couples gets divorced each year, in comparison to about 2 percent of married straight couples. (Note that the percent of couples that get divorced eventually is 50 percent, but only one or two percent get divorced in a particular year.)
Click here to read all of that particular report.

It appears that there is still a need for sound advice for couples who are dating and those whose marriages have fallen into unsatisfying ruts of boredom, anger, and misery.

For example: Humor is a skill worth developing.

“A relationship without humor is like shaking hands with gloves on.”
Sherry Suib Cohen 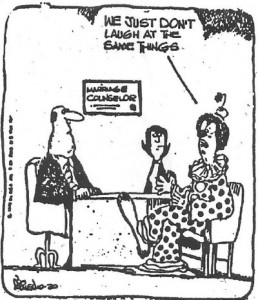 Studies show that sense of humor ranks at the top of lists of desirable traits. Brides-to-be who were asked what they admired most in their man, most often mentioned as attractive: sense of humor (outranking romantic nature, intelligence, and good looks). It seems that women take the decision to marry seriously, but the courtship has also got to be lighthearted. Humor also topped the lists in reports by Newsweek and in Men’s Health. But, it takes more than just telling jokes.

Here are some of my perennial suggestions for adding a touch of humor to romance.

* Waltz your partner around the room while you hum their favorite song.
* Leave little surprise notes around the house for your partner, such as, in the freezer: “Honey, the meatloaf was great!” or, about 100 pages ahead of the bookmark in their bedside mystery or Fifty Shades book: “I don’t know whodunit, but I’d like to do it with you.”
* Slip a new CD into their car stereo if they’ve been complaining about traffic jams on the way home.
* Use a waterproof marker to draw a heart encircling your initials on the hand-sanitizer dispenser they take to the gym.
* Put a candy bar in their briefcase if you know they love chocolate.
* In the middle of the stack of papers they bring home from the office, slip a note that says “I love you!”

I enumerated even more of these hard-won insights in my book, “Toilet Paper, Toothpaste, and Tuna-Noodle Casserole.”  The title was inspired by three of things couple had knock-down-drag-out fights about in my office. You probably know what the toilet paper and the toothpaste conflicts are, but one couple in pre-marital counseling almost cancelled their wedding because, “She doesn’t make tuna-noodle casserole the way my mother did!” (When the book was originally published, it included MY mother’s recipe. Yum!)

Relationship Autopsy
Talk about love is blind! Even when a dating relationship is doomed to eventual disaster, most people do not pay attention to the warning signs. Caught up in the thrill of infatuation, social pressures, or emotional neediness, we ignore, dismiss, and rationalize the signals of eventual failure. Some of us only figure it out in the post-relationship examination. Realizing that the disaster could have been avoided if we had only listened to the signals –including our best friends’ and families’ exasperated pleadings– is a valuable lesson for the future.

When the traditional marriage vows were written, life expectancy was only about 40 years, and the average marriage lasted only about 15 years. Now we have the potential for 80 years of marriage. The standard vows are too vague and too few to sustain that long of a relationship.

Does your prospect have a good sense of humor? Do they laugh and smile easily and often? Do you bring out the laughter in each other? Can they ease tension by finding humor in sticky predicaments without trivializing them? Is their humor good-natured rather than mean-spirited or angrily sarcastic? “Yes” to these questions is a very good sign. 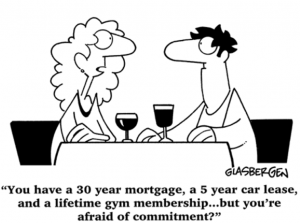 In the age of modern technology, when we are mindlessly clicking AGREE to “I have read the terms of usage”, commitmentphobia can arise because, by comparison, the terms of the love contract seem extremely vague. With my car lease, I know what I’m getting into. But, love?

The 14 tips for predicting the future of a dating relationship, and the 27 commitments, form the basis of the contemporary love contract. Individuals and couples who study and implement these can greatly increase the odds of their finding happiness together for the long term.

Here are a few of the specific terms of the love contract for couples to negotiate and agree to.

I realize that fairy-tale romance doesn’t really exist and that “happily ever after” demands a lot of work and that “getting married” is a life-long process; I will be patient..
I promise I will confront problems as they come up, not wait and hope they will go away.
I promise that I will never be too busy to sit and watch the sunset with you.
I will develop my sense of humor and invite you to laugh with me.

For the sake of lovers everywhere, what advice would YOU give? 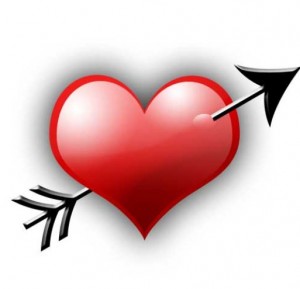