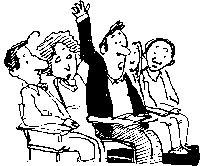 
But did you know that many jokes being told today actually were told thousands of years ago? They just get updated with modern scenarios and up-to-date semantics & syntax. How do we know this? We know because we (well, archaeologists, anyway) have a copy of the first joke book: Bibliotheca scriptorum Graecorum et Romanorum Teubneriana*, more commonly known as Philogelos, a collection of 264 Greek jokes first complied in the fourth or fifth century BC, and considered to be the first known joke book.

Here are some of the jokes as translated by Professor William Berg**.

Any resemblance between these ancient jokes and anything you might have heard in your lifetime is purely, absolutely historically fascinating…and funny!

130. A Sidonian professor enters the public bath as soon as it opens. Finding no one else there, he comments to his slaves, ‘It looks to me as if the bath isn’t working.’

141. Steering his ship, a quick-witted captain is asked, ‘What kind of wind do we have today?’ ‘Beans and onions, I’d say,’  comes the response.

146. A sharper steals a pig and starts running with it When he’s caught, he sets the pig on the ground and thrashes it, declaring, ‘Do your digging here, not on my property!’

147. A quick study, coming upon a singer who’s both shrill and off-key, greets him with the words, ‘Hello there, Mr. Rooster!’ ‘Why do you call me that?,’ asks the singer. ‘Because whenever you crow, everybody gets up.’

148. When the garrulous barber asks him, ‘How shall l cut  your hair?,’ a quick wit answers, ‘Silently.’

160. A Kymaean goes to see a friend of his. He’s standing in front of the friend’s house, calling his name, when another voice answers, “Shout louder, so he can hear!” So the Kymaean shouts, “Hey, Louder!”

170. Someone asks a Kymaean where the attorney Dracontides lives. The guy responds, ‘I’m all alone here,
but if you don’t mind, watch my workshop and I’ll go out and show you.’

228. A drunk is being railed at for losing touch with reality when he’s had a snootful. Barely able to see straight because of the wine, the drunk retorts, ‘Who’s the drunk here, you or me – you two-headed freak!’

263. Someone tries to needle a quick-witted man by telling him, ‘I had your wife for free.’ But he just says, ‘Me, I’m forced to put up with such an evil. What’s forcing you?’

265. A student dunce asks how many pints a 9-gallon amphora holds. ‘Are we talking wine or water?’ is the
answer he gets.

It has been said that there are two sure rules for making something funny; unfortunately, nobody knows what they are! But, somebody must know something because here you can see the ancestral heritage of material you’ve heard and enjoyed from Hope, Youngman, Dangerfield, Leno, Benny, Berle, and many others who entertain us in modern times.

This jester tips his hat to the humorists, comics, and comedians who keep us laughing, whether the jokes are 3,000 years old or fresh and original, whether they are delivered by professionals, traveling salesmen, class clowns, or the person in the cubicle next to yours. Hooray, for funny people and for jokes!

Now, let’s see, what would you imagine a 3,000 year-old joke might have sounded like?
“Knock, knock.”
“Who’s there?”
“Euripides.”
“Euripides who?
“Euripides pants, you in big trouble!”

Try your hand (or funny-bone) at coming up with our own, then share in the comment section.